Reflecting on our "SourceSafe Must Die" Campaign 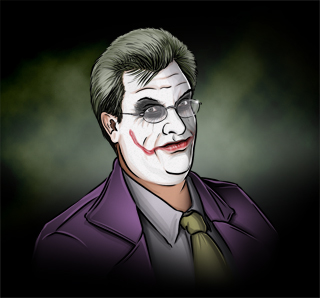 On the product side of marketing, planning has served me well.

And since the whole point of marcomm is to draw attention, I try to do things which are at least a little outrageous:

We did those things because nobody had done them before.  I'll try just about anything.  I just want to see what works.  And afterward, I usually report here on my blog about how these things go.

In the second half of 2009, we did a marketing campaign for Vault.

This is your brain on SourceSafe

As I mentioned above, Vault was originally positioned to be a compelling replacement for SourceSafe.  Since our 5.0 release contains a new Handoff feature which makes it easier than ever to make the transition, we decided to focus this campaign on the product's original positioning, as a SourceSafe replacement.

The creative on this campaign was ... edgy.  In a nutshell, we compared SourceSafe to an addiction.  The ads were loosely patterned after billboards and ads aimed at convincing people not to use illegal drugs.  The basic idea was to portray SourceSafe as something which might send your life into a downward spiral toward a 12-Step program or rehab.

We knew from the beginning that some people were going to be ticked off.  We just weren't sure how many people and who.

We tried testing the ads by taking them home to our spouses for feedback.  This resulted in a few tweaks, but we didn't get any criticism that caused us to change course.  One guy's wife suggested that the ads would be a better reflection of our industry if the models in the stock photos were less attractive.  :-)

So we moved ahead.  The first thing we did was run the ads in MSDN magazine, which is published by an outside firm in close coordination with Microsoft.  Nobody complained, so we kept going.  We ran banner ads on several Microsoft-centric websites. 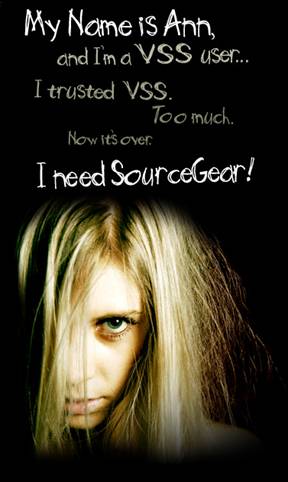 And then we showed up in November at the Microsoft Professional Developers Conference with this campaign as the theme for the entire booth.  We gave away hundreds of T-shirts saying "VSS Must Die".

You can see the whole thing at vssisdead.com

This campaign was darker and more negative than anything we've done before.  We knew we were pushing the envelope.

Did we go too far?

Well, we certainly didn't expect to win any Most Admired Company awards by running a marketing campaign which portrays the users of our competitor's product as drug addicts.  :-)  But the campaign was intended to be funny, in a "humor noir" sort of way.

Somewhere during the execution of this campaign, I realized that SourceSafe is very much like that dorky kid in high school that gets teased by everybody.

Why do high schoolers pick on other kids?  Because it works.  In high school, popularity is correlated with several factors, but one of them is unkindness.  The meaner you are (to the right people), the more popular you are.  Once the crowd has observed who is getting bullied by the popular kids, others join in.  Even if they don't know the kid, they start ripping on them, just to try and identify with the "in" crowd.

As grownups, most of us know that this is reprehensible.  No kid deserves to be treated this way just because they're different.

But teenagers do it anyway.  And they do it because it gets them what they want.

When it comes to poking fun, if any company is fair game, it's Microsoft.  And if any Microsoft product is safe to pick on, it's gotta be SourceSafe.  SourceSafe is the bullying target that everyone can agree on. 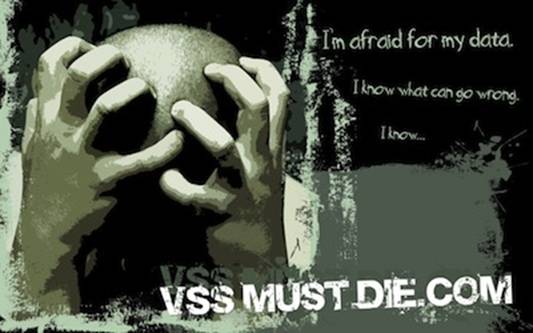 Dissing SourceSafe is so common that folks do it whether they have used SourceSafe or not.  Just like in high school, people join the bashing just because they think it makes them look cool.

And SourceSafe has basically nobody defending it.  When emacs people get an attitude, the vi fans speak up.  When Visual Studio fans start trash talking, the Eclipse crowd starts showing features.  But nobody stands up for SourceSafe.  People bash it, and SourceSafe just mopes down the hall wearing flood pants and a shirt with the top button done.

So anyway, we chose to go negative on this, but we figured we were in plenty of company.

And while I'm rationalizing and making lame excuses for being a jerk, please note that SourceSafe is NOT REALLY A PERSON.

In general, this campaign worked.  People at PDC loved the T-shirts.  The click-through rate on the banner ads was the highest we have ever seen.

Some people were offended, but we received far more positive feedback than negative.

However, just like the awkward kid at school, SourceSafe doesn't really deserve this.  I've admitted it before, and I'll do it again now:  SourceSafe isn't really that bad.

In its day, SourceSafe was awesome.  When it was created by One Tree in the early 90s, it was nearly revolutionary.  SourceSafe brought ease of use in version control to a whole new level.  Microsoft acquired this product because it was outstanding.

Over the years, SourceSafe hasn't always aged well.  Its architecture didn't fit with the Internet.  By relying on file sharing protocols for network access, SourceSafe ended up with data corruption problems that triggered a tidal wave of criticism.

But overall, SourceSafe has been a very successful piece of software.  Most of us would love to create something that has thousands of happy users 15 years later.

At trade shows, people come up to us and ask why they should switch from SourceSafe to Vault.  We always respond by asking them if they are happy with SourceSafe.  If they say yes, we tell them not to switch.  This conversation has happened at every show I have ever attended.  Lots of people use SourceSafe every day without problems.

And despite those negative ads, I believe SourceGear is doing more for SourceSafe users than any other company, including Microsoft.  We recently shipped SourceOffSite 5.0, a major upgrade with improved performance, new features, and a fancy new ribbon UI.

Eric, if this is an apology, it sucks.

It's not.  I don't owe SourceSafe an apology.  SourceSafe isn't a person.  It's just a bunch of code.

And it's hard to imagine the need to apologize to Microsoft as a company when so many of its employees stopped by the booth at PDC to join the bashing.  Some of them took shirts.

So I'm not really apologizing.  I'm just sharing about my experience and my reactions to it.

One exception:  SourceSafe's principal author was Brian Harry.  In working through the Microsoft acquisition of Teamprise I came to know Brian and developed a great deal of admiration for him.  He is incredibly smart, and his accomplishments are amazing, including SourceSafe, the CLR, and Team Foundation Server.  Brian, if our campaign caused you any personal offense, please accept my public apology.

So anyway, there you have it.  I went negative.  And it worked.

I'm not eager to do it again.