More on the sad state of print publishing for developers

People usually think of SourceGear as "Eric Sink's company", but that's only half true.  My business partner Corey Steffen has the same ownership that I do -- he's just not as loud as I am.

Because Corey is sort of quiet, most people don't know much about him.  Here's a piece of information that I think is interesting:  Corey is an amateur farmer on the side.

Yep, Corey spends his days running a software company and his off hours running a small farm.  So he comes to work with stories about chickens and sheep and horses and pastures.  Oh my.

(It is interesting to note that Brian Harry, creator of SourceSafe and Team Foundation Server, also has a passion for farming.  So Corey and Brian are two data points that suggest some sort of a pattern involving version control and agriculture, but I dare not try to extrapolate.)

Anyway, since Corey's life is such an odd juxtaposition of two extremely different pastimes, folks here at the company tend to make the occasional joke about it.  In fact, Corey has been the recipient of merciless but harmless teasing here for over a decade now.  For some reason, the subject just never gets old.  When we get together for our company lunch on Wednesdays, a joke about Corey getting up at 4:30am to clean out the horse stalls before he comes to the office to clean out the bug database is probably a sure laugh.

Continuing in this fine tradition, one of our guys recently found the following promotional card and brought it in for a quick joke at Corey's expense: 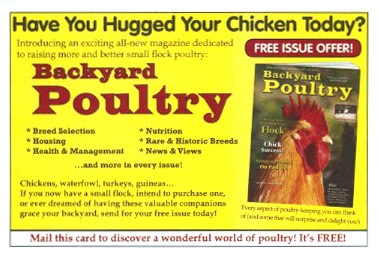 "Hey Corey, I thought of you when I saw this magazine.  Maybe you should pick up a copy?"

And it got even funnier two seconds later when Corey admitted that he was already a subscriber.

The next day, he brought in his copy of the most recent issue: 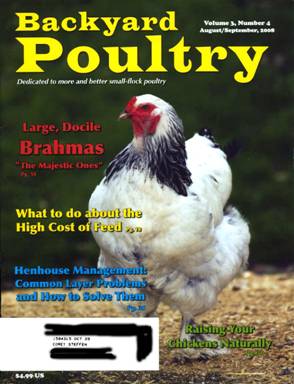 I would like to be able to say that I took this in stride.  After all, I've known for years that Corey keeps chickens.  I still remember back in 1997 when Corey joined the company he told me that his chickens provide them with 18 eggs every morning.

How does a family make use of 18 fresh eggs EVERY SINGLE MORNING?

Anyway, seeing this magazine left me speechless.  In part I was surprised by yet another Green Acres moment from Corey.

But mostly I was just shocked that this magazine exists.  I mean really.  An entire print publication for people who raise chickens as a hobby?  That's what I call a niche.  How does the publisher survive?

More to the point, how can this magazine be successful when Dr. Dobb's looks like it might be pushing up daisies sometime before the World Series is over?  Dr. Dobbs is arguably the most prestigious developer magazine in our industry, but it hasn't been looking any too healthy over the last year or so.

It's gotta be all about market penetration:

Most software developers no longer use content in paper form.

Andy Brice recently commented on the poor sales of Charles Petzold's book on WPF 3D.  This is another sign of the major shift in our industry.  Petzold was maybe the last of his breed.  Most authors gave up years ago on the idea that they could make a living from writing alone.  Until quite recently, Petzold was one of the few who still did, and now even that appears to be changing.

Software development magazines and books are dying.  You already know this.  I already know this.  But I continue to be amazed at the pace of this change.  People resist change.  Billions of dollars of VC money has been lost by overestimating the willingness of people to embrace change.  In this case, I have underestimated it.  Looking ahead ten more years, I wonder how much smaller the "Computers" section at my local Borders bookstore will be.

They'll probably just fill the extra space with a bunch of titles about backyard livestock management.