My regular readers know that I have a love/hate relationship with magazine advertising, as revealed in my two previous entries on the topic:

Well, after twelve months of being out of the world of print advertising, we are back in.  Our new series of ads is starting to hit this week.  The ads will be appearing in SD Times, MSDN, and Dr. Dobbs.

I thought you said developer magazines are dying?

I still believe developer magazines are on the decline.  In fact, two of the pubs I mentioned in the March 2006 article died since I wrote it:

Anyway, I maintain that as a whole, developer magazines are a declining industry, not a growing one.  But I still believe the decline will be very slow.  These pubs will be around for quite a while longer.  And they still serve a purpose.

So why are you now advertising again?

Because we have a message we want to deliver.

SourceGear is taking the next step in its growth.  The transition process involves a lot of changes.  I consider SourceGear to be an adolescent company.  We're going through some changes that feel pretty radical, but they're all normal.  We've got more people, more space, and more stuff.  Our products are changing as well.

Vault 1.0 was released four years ago.  Since then we have done six major upgrade releases, but those improvements have been largely evolutionary, not revolutionary.  In its essence, Vault has not changed:

With Vault 4.0, we are changing all this:

In addition to all these changes for Vault itself, we are releasing another product called SourceGear Fortress.  Since this product includes Vault, we could have called it "Vault Expensive Edition" or something like that, but we decided to give it a new name and a 1.0 version number.  Whereas Vault is positioned as a version control tool, Fortress is positioned as an Application Lifecycle Management (ALM) solution.

Bottom line:  This whole situation is a re-launch of Vault.  If Vault were a restaurant, we would call this our "Grand Re-Opening".  And we would run ads to tell everybody about it.  So that's what we're doing.

But aren't you a hypocrite for saying that magazine advertising is bad and then jumping back into it?

But even in my March 2006 article, I said we would advertise again.  I have always described our absence from the printed page as a vacation, not a permanent move.

Really bad mistakes happen when you get yourself convinced that idea X is a terrible thing and then your company grows to the point where X would be beneficial.  The best decision-making happens with an open mind and a careful examination of current context.

Why did you choose these three publications?

All three are very good publications.  Combined, they allow us to reach all the different people we hope will hear our message:

For the Manager /Cross-platform combination, SD Times was a fairly obvious choice.

To reach the Developer/Windows-centric people, CoDe was tempting, but MSDN is the magazine for this audience.

If we had included one more publication, it probably would have been Redmond Developer News, thus allowing us to fill the empty Manager/Windows-centric line in the table.  This is a new publication, but so far I am impressed with it.

How much is SourceGear spending on this?

We've committed to twelve months of ads in three publications at a total cost of $173,202.  That's a big chunk of money, but I suspect we're spending less than most other companies our size.  This number represents well under 5 percent of our annual revenue.  Simply by counting ad insertions I can tell that our competitors are spending a lot more than we are, and their revenue probably isn't that much higher than ours.

My philosophy on print ads is:  Do them extremely well, or don't do them at all.

Back in 2003, Vault's first promotional campaign was built around a movie theme.  We hired the services of an incredible photographer to take pictures and video of an old bank vault.  We printed posters that looked like the movie posters you see at theaters, with that narrow boxy font at the bottom.  We made the product packaging look like a movie DVD.  We got Hal Douglas to do the voiceover for our trailer.  Some folks told us it was the best promotional campaign they had ever seen for a software product.

This time, we're going with a comic book theme.  (Note that I'm talking about comics in the style of Spider-Man and X-Men, not Garfield and Peanuts.)  Each full-page color ad will be one comic strip, a different episode each month for a year.  As a whole, the twelve episodes fit together to form a story arc.

The first two episodes are available now on our website:

(Kudos to SourceGear's own John Woolley for the excellent artwork.)

The characters in the series are the Evil Mastermind and his vast horde of Minions who are slaving away on various projects in service to the grandiose aspirations of their maniacal manager.  Broadly speaking, the Minions are software developers, and the Evil Mastermind is their clueless boss who constantly mistreats them and makes unreasonable demands.

Our original plan was to launch this campaign along with the final releases of Vault 4.0 and Fortress 1.0 at the SD West trade show on March 20th.  Unfortunately, those product releases have slipped a bit.  As is so typical in our industry, our release date has become our beta date.  :-(  So at SD West we'll be releasing and demonstrating a preview of Fortress 1.0, but the final releases will happen sometime in Q2. 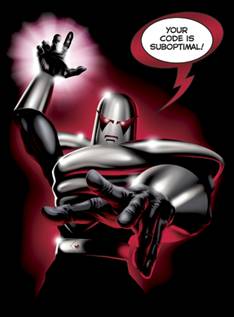 But we're launching the new marketing campaign that week anyway.  As part of the campaign, we'll be giving away Evil Mastermind T-shirts to anyone who visits our booth.  We also have four prize drawings:

Will our new campaign be as effective as the movie campaign was?  I don't know.  What I do know is that we have aimed just as high, so we're hoping for excellent results.