In Search of Stupidity, 2nd Edition 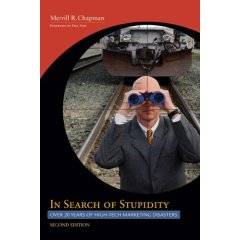 Rick Chapman's book, In Search of Stupidity, is now available in its second edition.  It is both fun and insightful.  Highly recommended.

I was honored that Rick and Apress asked me to write the foreword for this edition.  The text of my foreword appears below.

I love this book.  In telling stories about some of the finest fiascos in our industry, the author adds unique insight and humor.  The result is a book that is both readable and worth reading.  That's a powerful combination that I find increasingly uncommon.  I was a fan of the first edition of "Stupidity," and I am honored to be writing this foreword for the second edition.

I am particularly fond of the title of this book. Taken completely out of context, it suggests that if you want to find stupidity in our industry, you have to search for it.  I envision a typical person who wanders accidentally into the software and computers section at his local bookstore.  He sees this book on the shelf and believes that stupidity in high-tech is difficult to find.

Aw, never mind that.  People are not so easily fooled.  Anybody who reads the newspaper can easily look at our industry and see that stupidity is like beer at an NFL football game:  Half the people have got plenty of it and they keep spilling it on the other half.

As of August 2006, here is what the average person knows about the world of high tech products:

The world of high-tech is fouled up beyond all recognition, and everybody knows it.

The funny part is that most of the stupidity never makes it into print.  Those of us inside the industry know that things are actually even stupider than the perspective in the press.  For example, most people know that whenever Microsoft announces a new product they give it a really boring name that nobody can remember.  But those of us inside the industry know that the boring name was immediately preceded by a "code name" which was memorable or even clever.  It's almost like Microsoft has a department whose mission is to make sure their public image always looks lame and pedestrian compared to Apple.

And let's not forget that stupidity can show up in success as well as failure.  Do you know the inside story of the Motorola RAZR?  In the original plan, the powers-that-be at Motorola were convinced that the RAZR would be a "boutique phone", a niche product that would appeal to only a small segment of the market.  They ordered enough components to make 50,000 of them.  In the first quarter of production, the wireless companies placed orders for over a million units.  Motorola had the most popular cell phone on the market, and they were completely unprepared for it.  It took them a year to get production capacity up to meet the demand.  Today, Motorola is shipping RAZR phones at a pace that is equivalent to selling 50,000 of them every morning before lunch.

In the news media, on the message boards, and here in this book, stories about product disasters in our industry are a lot of fun to read.

That's why the first edition of this book was great, and this one is even better.  I applaud the author for the changes he has made in the second revision, giving more specific attention to the matter of learning from the marketing mistakes made by others.  I imagine there are lots of people who will enjoy that kind of thing.

But truth be told, not all of us aspire to such a high and noble station.

If you are like me, you probably lied to yourself about why you wanted to read this book.  You told yourself how great it would be to learn from the mistakes of others.  In reality, we don't want to learn -- we want to gloat.  We like to watch things crash and burn.  This book is the marketing equivalent of the car chase scene from Terminator 3.

Wielders of clichés would say that misery loves company.  Call it what you will, but let's just admit it together:  We like to read about products and marketing efforts that exploded in a ball of flame.  It helps us feel better about our own stupidity.

And in my opinion, that's okay.  In the vast constellation of unhealthy vices and guilty pleasures, this book isn't really all that harmful.